The Revd Dr Hana Kim had an upbringing that truly reflects the global nature of his current ministry at Myungsung Church, the largest Presbyterian church in the world.

Born and raised in Seoul, Korea, he spent his adolescent years in New Jersey where he attended high school before enrolling at UMass Amherst. He returned to Korea for seminary before going on to receive his Th.M from Princeton Seminary and his Ph.D at Drew University with a dissertation focused on American church history. In 2012 he was honored by the World Economic Forum in Davos, Switzerland, which named him to their Young Global Leader Forum. In early 2017 the Search Committee  of Myungsung Church nominated him to be their   new Lead Pastor, and he was subsequently voted in by an overwhelming majority of the congregation. He spends most of his free time with his wife raising their three loving children, but remains an avid basketball player.

His commitments to the universal body of Christ include sitting on the boards of Sojourners International and Princeton Theological Seminary. He is honored to serve in the Global Christian Forum as it seeks to be a crucial component of the worldwide ecumenical movement. 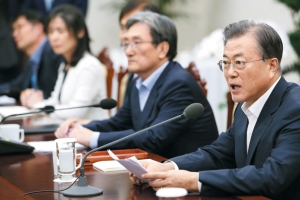